It may not always be the best idea to pocket a ball in 8-ball. Especially when it is the only thing preventing your opponent from running out.

It may not always be a good idea to sink one of your balls, especially when your ball is blocking your opponents last ball(s). 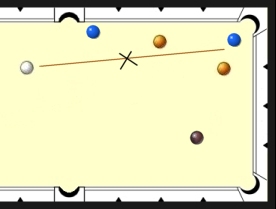 You are the BLUE balls, and your opponent is RED.

Unless you feel that you can run out, play it safe and attempt to do something with the ball near the side pocket. You may want to take it away from the wall for your next chance at the table.

A run out can be defined a little differently in each game, but the overall meaning is the same. It is a positive thing for the person at the table. In a nutshell, a run out usually occurs when all the balls have been cleared.

In 8-ball a run out occurs when you or your opponent is able to get in all 7 of your balls and the 8-ball.

In 9-ball you have 2 different views; some people believe it can be considered a run out when all the balls have been cleared off the table without scratching, and more than 1 consecutive shot was used. For example, running out the 7 through 9. Other people believe that making a combination on the 9 or getting the 9 on the break is still considered a run out, even though all the balls haven’t been cleared from the table.

In Straight pool, or 14.1 Continuous there are also 2 different views. Some say that it is a run out when you’ve reached the total number of points needed to win the match. Others say just getting to the 15th ball and having your opponent rack the other 14 means that you had a run out for that rack.