One of the easiest ways to get positioning is with the Stop Shot. That is why it is very important that players master the timing and speed needed to execute this shot perfectly 99% of the time. This quick drill will help you get that timing and speed down, and this drill is a great workout for the beginner player.

One of the most important shots in the game of pool is called the Stop Shot. It is so important that this drill should probably be closer to the top of the list of drills on this site. The important thing is that you are reading it now. So without further ado,… please read on.
The reason this shot is so important is because it is so basic and easy to execute correctly after a little practice. You won’t need to worry about running the cue ball into other balls on the table after making contact with your target object ball because the cue ball will just stop on impact.

The only catch, is that you will need to be setup in a straight line from the cue ball, through the object ball and the target pocket. So for this drill, you will make sure you have that setup for every shot.

Balls are ramdomly placed onto the table. You get ball in hand for every shot. Make sure you have lined everything up straight from the cue ball to the target pocket. 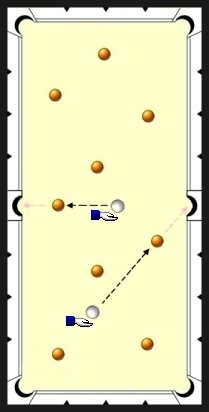 The second Stop Shot is done with a little draw / backspin. It shares similar characteristics with the previous version of the Stop Shot. You must hit the cue ball so that on the moment of impact it has no more back spin and is in fact getting ready to start spinning foward. The time between the back spin and transfer into the foward roll is when you want the cue ball to be making contact with the object ball. Since there will be no spinning going on, the cue ball will stop dead in its track.

Note: If the shot is perfectly straight in, it doesn’t matter how hard you hit the cue ball, it will still come to a complete stop on contact. Hitting the cue ball too hard will be a waste of energy and may also throw off your aim, so stay calm.